From the trailhead steep steps climb up beside the stream to the waterfall. 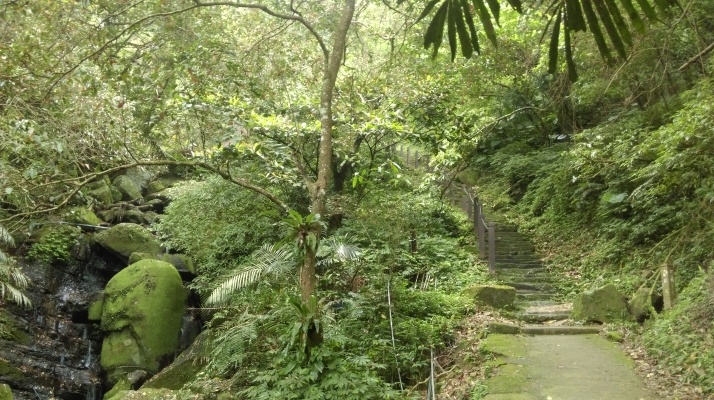 climbing up to Yinhe Waterfall

Yinhe Waterfall doesn’t have a very strong flow, but its unusual setting makes up for it. There is a temple carved into the cliff face behind the waterfall. Part way down near the temple, the falls bounce off a rock face before continuing its plunge to the bottom. You can climb steps from the temple to get behind the flow of the falls. It is best not to come here in the middle of summer when the waterfall is mostly dried up. Come after some rains or in the winter. Also, the stairs around here are very slippery so be careful.

The trail continues up more steep steps leading up to the top of the waterfall. Keep following the signs for Maokong Gondola Station. At the top the trail follows the stream passing a house along the way.

trail going away from Yinhe Waterfall

climbing up to the top of the falls 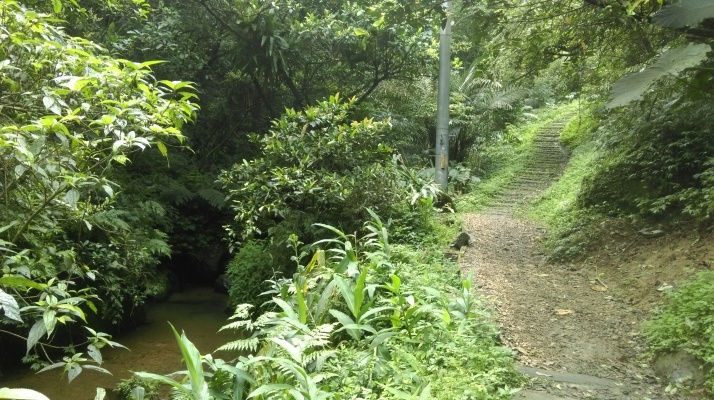 following the stream away from the falls

Turn left at a trail junction and bridge, again signposted for the gondola station. 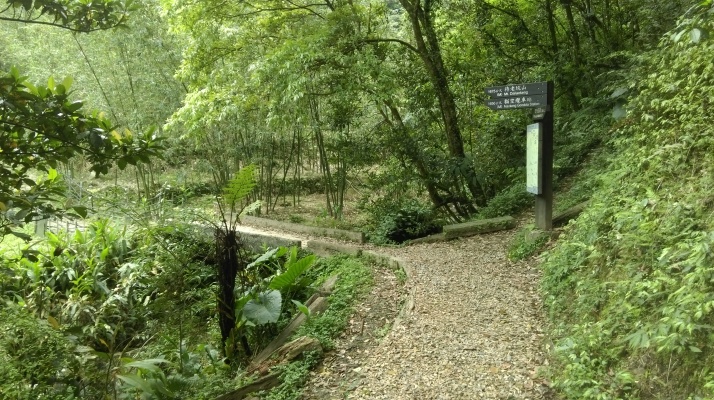 Keep following this trail as it climbs up on wood-supported steps and goes along the hillside. Ignore a couple of trails the fork off to the left.

Near the end this trail passes another house with a terraced field then ends at a four-way trail junction. 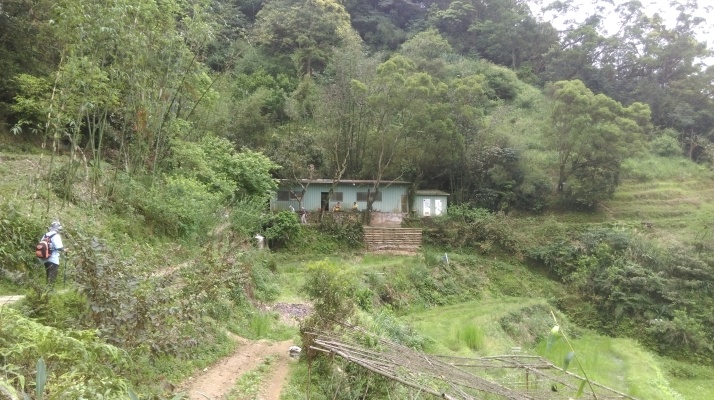 passing a house near the end of the trail

Go straight at the junction, taking the stairs going down, signposted for Ln. 38, Sec. 3, Zhinan Rd. 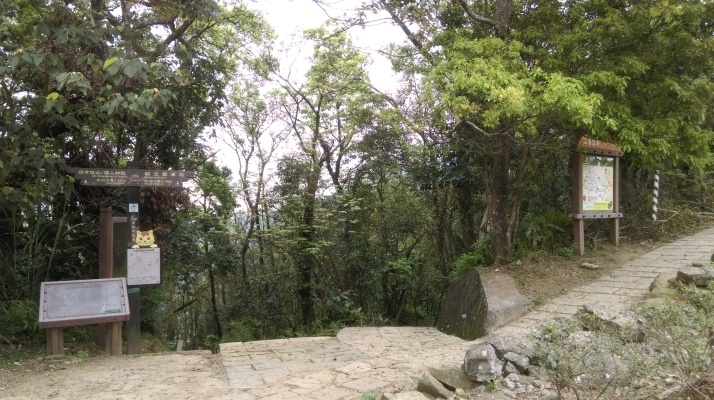 Cross the road at the bottom of the steps and continue taking the steps going down now passing some tea fields. This trail ends at a junction with the Camphor Trail.

going down through the tea fields

junction with the Camphor Trail

The Camphor Trail is a lovely, easy walk through the tea fields that gets surprisingly few visitors despite being so close to the gondola station. The trail goes past houses and tea farms, and an artificial pond with a rest area. Note, this trail is only a few years old and does not appear on Google Earth’s satellite imagery.

Turn left at the trail junction and follow the Camphor Trail all the way until it ends at a road. 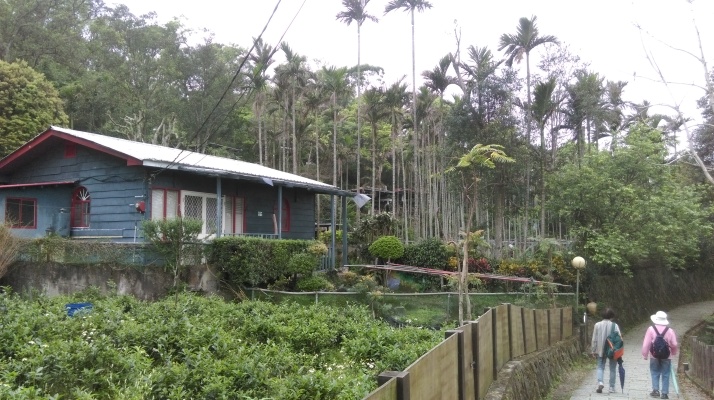 Keep going straight on the road then turn right at an intersection up ahead. This short road leads to a temple which has a good view of Muzha. From the temple there is a trail that leads down to Muzha.

The trail ends at another road. Turn left and walk on the road to the gondola station, then turn right at the T-intersection in front of the station. The area around the gondola station is always very crowded, but fortunately it seems most people don’t venture more than few minutes walk from the station. Just after the T-intersection you’ll pass an outdoor food court (the food here is generally not good at all). There are some coffee and tea shops at the intersection. 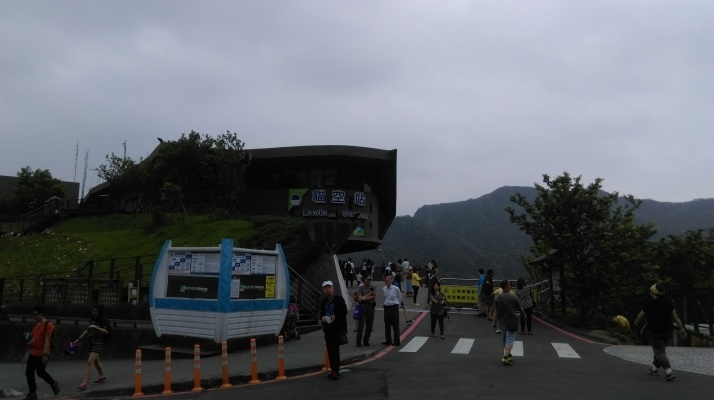 From the T-intersection walk on the road until you come to the Tea Exhibition Center. A short distance from the gondola station the road passes a row of tea shops and restaurants squeezed against the side of the road and the hill slope. This a good place to get something to eat. The food is tea themed and includes things like tea fried rice.

restaurants along the road

Further along the road, you’ll pass the Cat’s Got Nothing To Do outdoor coffee shop, which has good views and is a good place to stop for a rest.

relaxing the Cat’s Got Nothing To Do

Continuing along the road passes a temple then the Tea Exhibition Center where you can get a free cup of tea and drink it in the center’s small garden. The tea center also has a small museum. 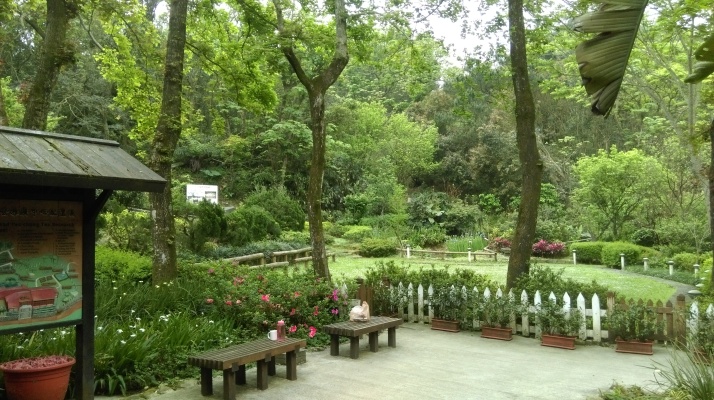 garden at the Tea Exhibition Center

Just past the museum turn left at a small parking lot and a trail leading down signposted for Pothole. 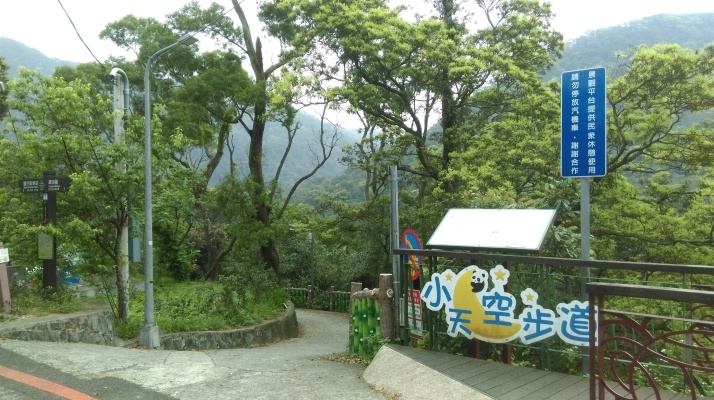 take this trail going down after the tea center

Steep steps lead down to a 4-way trail junction. Keep going straight at the junction, signposted again for Pothole.

This short trail leads down to the stream and crosses it over a rope bridge. Here can also see the potholes, small round holes in the rocks of the creek bed from which Maokong gets its name, derived from Taiwanese meaning “cat-scratched” or “cat hallow”. 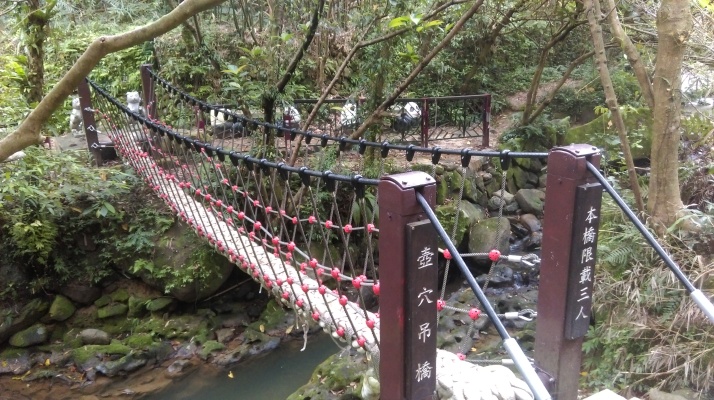 Return back up to the trail junction and turn right, signposted for Changhong (Rainbow) Bridge. The trail goes past a wall decorated with scenes of tea farming then steep steps lead down to a bridge crossing the stream.

stream crossing at the bottom

The trail turns left at the bridge and passes a small waterfall before ending at a road.

Go straight up the road, then continue straight when this small road mergers with the main road. Keep walking on the road until you come to a trail leading up on the right hand side, signposted for Dacheng Temple.

take this trail climbing up

This short, steep trail made mostly of wooden steps climbs up the valley and takes about 10 to 15 minutes to climb up. 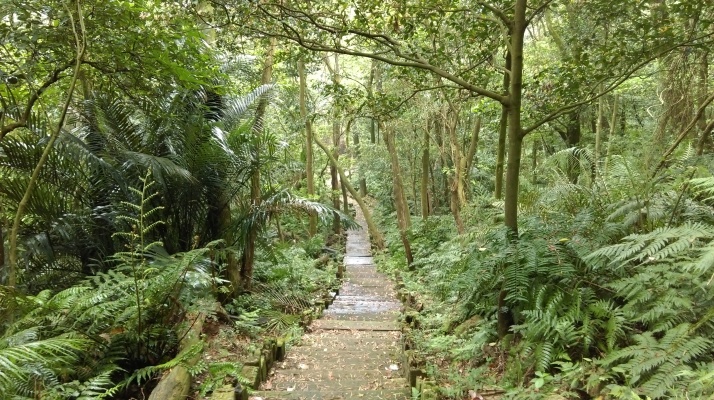 wooden steps climbing up the valley

Turn left at the end of the trail and walk on the road to the Zhinan Temple Gondola Station. (Along the way you’ll pass another trail starting on the right side of the road. This is the start of the hike to Ergeshan. Please my Ergeshan entry for details on this hike.)

From the gondola station follow the walkway to the temple. Zhinan Temple is well-known and has great views of Taipei when the weather cooperates. Note that the hills of Maokong are also the rainiest part of Taipei and thunderstorms often form above the mountain here on summer afternoons. If that happens expect to gondola to shut down for several hours. 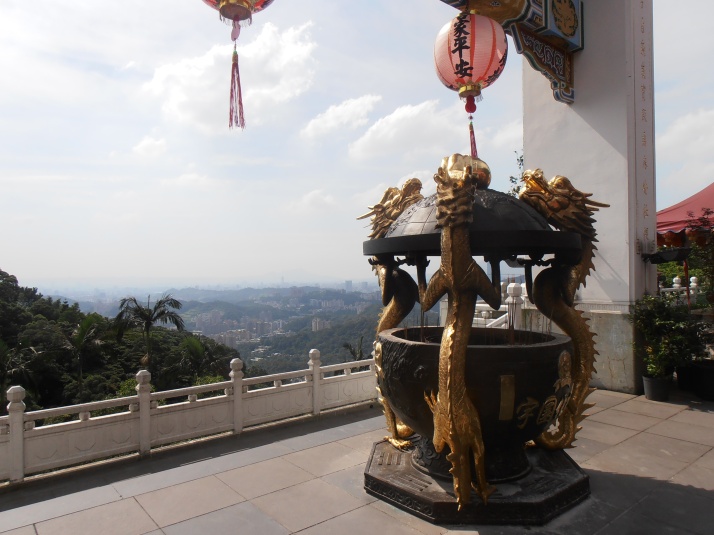 From the temple take the covered walkway that connects the temple buildings. 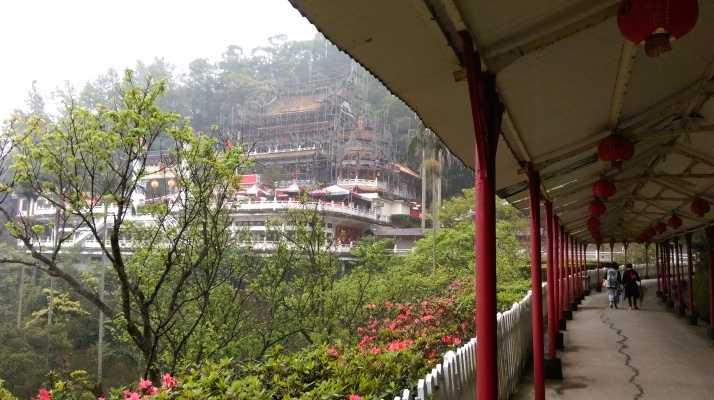 From this second temple take the steps going down from the front at turn left at the landing.

Then follow this walkway all the way down. The wide stone trail passes some houses, statues, and pavilions on the way down.

trail going down from the temple

trail going down from the temple

Map of the Hike

There was an error retrieving images from Instagram. An attempt will be remade in a few minutes.

Brief travels and hikes through Taiwan

OFF THE BEATEN TRACK

Sights, interesting places, and other things about Taipei and Taiwan mixed with film photography.