Introduction: Start from Yangming Park and its two waterfalls, then hike around the slopes of Mt Shamao, up a secluded gorge to another waterfall, and finally finish by taking the popular Tienmu Trail down to Tienmu.

The bus stop and gate are located near where the road crosses the stream at the bottom of Datun Waterfall. 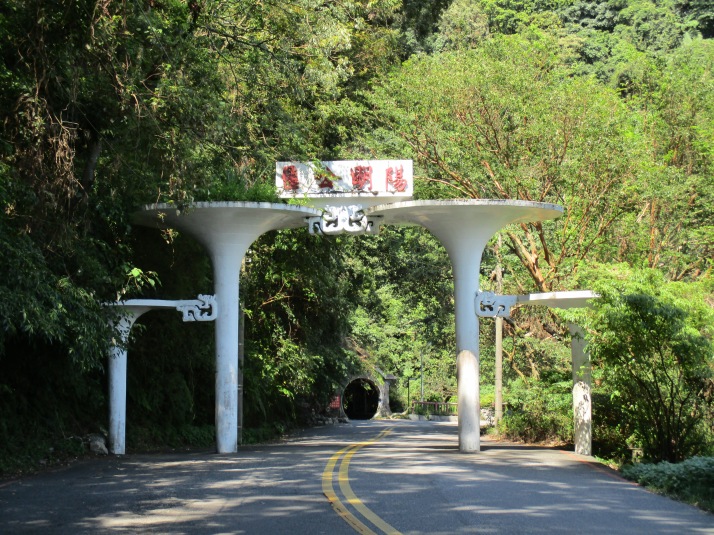 Yangming Park has lots of pathways, pools, birds, statues, and playful squirrels. Take the stairs heading up across from the flower clock, past a statue, to what appears to be a temple at the top, but is actually a shop. There are always lots of birds and squirrels in this area. If you are lucky you may be able see one of Yangmingshan’s blue magpies around here. 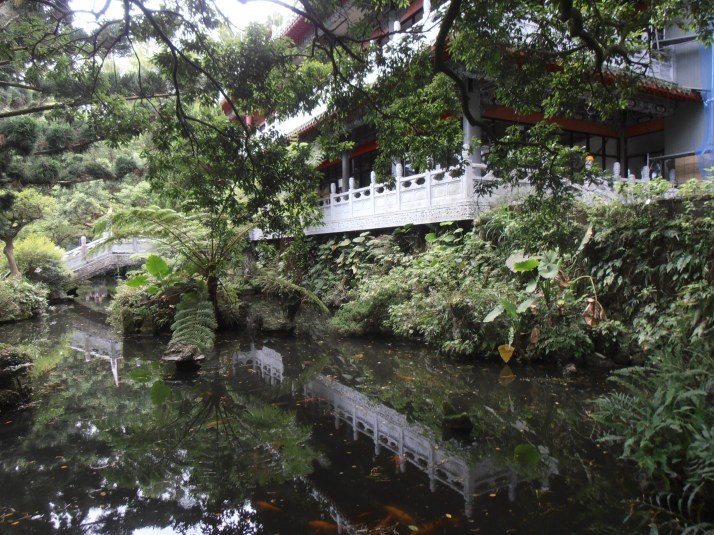 Turn right at the store and the pathway leads to a pool where a small stream enters the park from the mountain above and a pond, another very nice spot.

From here head down through the park and past a statue of Yangming himself.

At the bottom there is a small visitor center. Turn left here where there is a pedestrian only road that enters the park. Take this road across the bridge and you’ll come to another bridge over a small waterfall after a couple of hundred meters. There are some rather slippery stone steps that climb down to the bottom of the falls. These falls don’t seem to have a name and aren’t on any park maps. The waterfall has an unusual milky appearance due to minerals in the water, so I’ve decided to call it Milk Waterfall.

From the bottom of falls turn left and walk along the road towards the Yamgingshan Bus Terminal. Along the way you’ll pass another park entrance gate. This walkway along the main road between Yangming Park and the bus terminal is very popular. The walkway climbs high above the road for a while. When the walkway is back a street level again look for a small road (Hudi Road) that merges onto the main road about 400m past the park gate. Make a U-turn at the intersection and take the left fork. There is no crosswalk here, you’ll have to make a short climb down from the walkway and run across the road. There are two trails that start from Hudi Road (on the left side of the road) just past the fork. Both trails are unmarked. Take the dirt trail, not the stone steps going down.

start of the trail around Mt Shamao

The dirt trail goes along the side of Mt Shamao around to the other side. Mt Shamao is a very steep-sided old cinder volcano. This trail is mostly flat and well shaded. 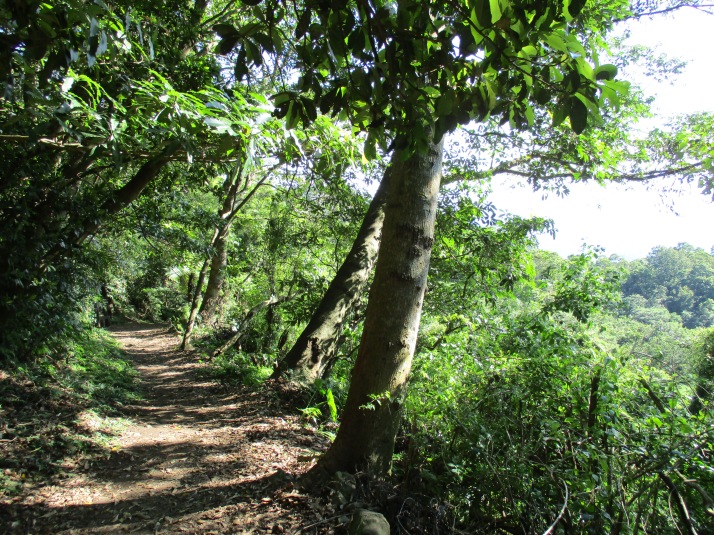 The trail ends at a small empty parking lot at the end of a road on the south side of the mountain. Walk down the road and look for some stairs going down on the left side, signposted for Sec. 7, Zhongshan N Rd. 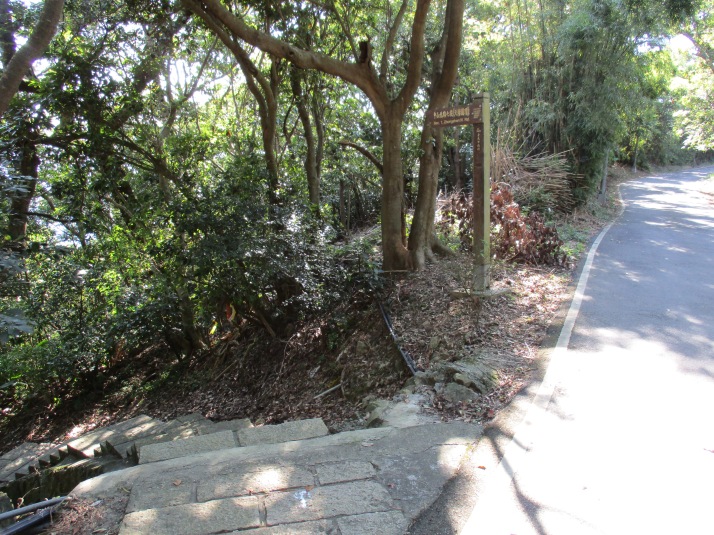 start of the trail going down from the road towards Tienmu

From the road steps head down and cross another road. Continue to follow the trail going down. At this point you’ve left the national park and the trail will pass by some shacks, farms, and garden plots on the way down. 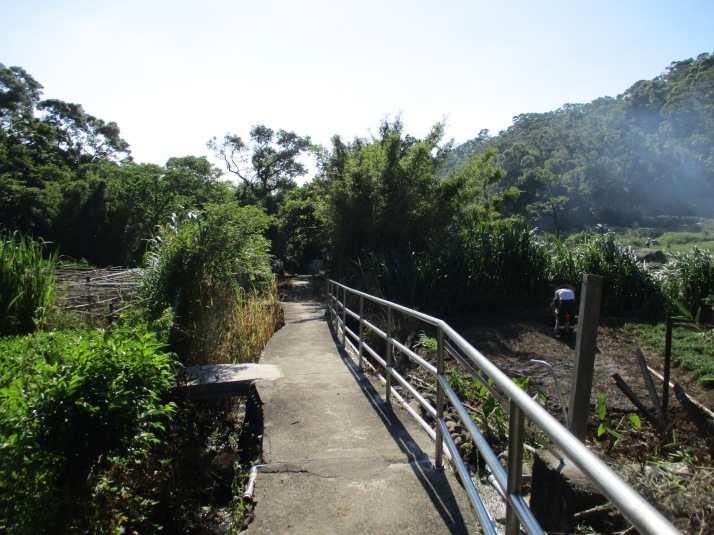 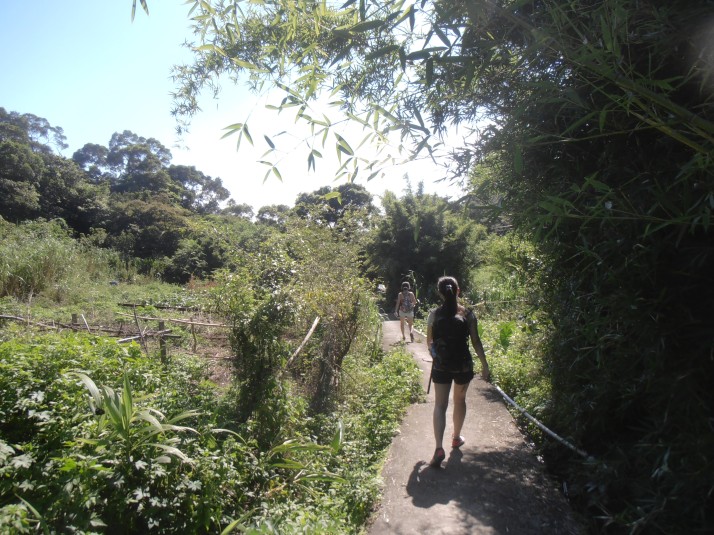 trail to Zhongshan Rd going past some garden plots

Cross another road and keep going straight downwards when others trails merge onto this one.

Turn right at a junction just before a Land God shrine and below a small village continuing to head downhill.

From the Land God shrine continue heading downhill. Cross another road and continue taking the steps down and the trail ends a temple beside the road. 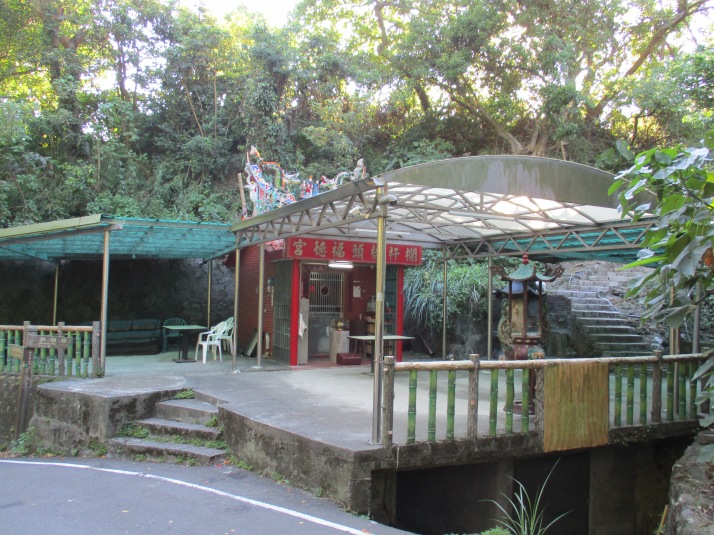 temple at the bottom of the trail

Turn right and walk down the down a short distance to where it crosses a stream. There is an old arch bridge and a rest area next to the road bridge. 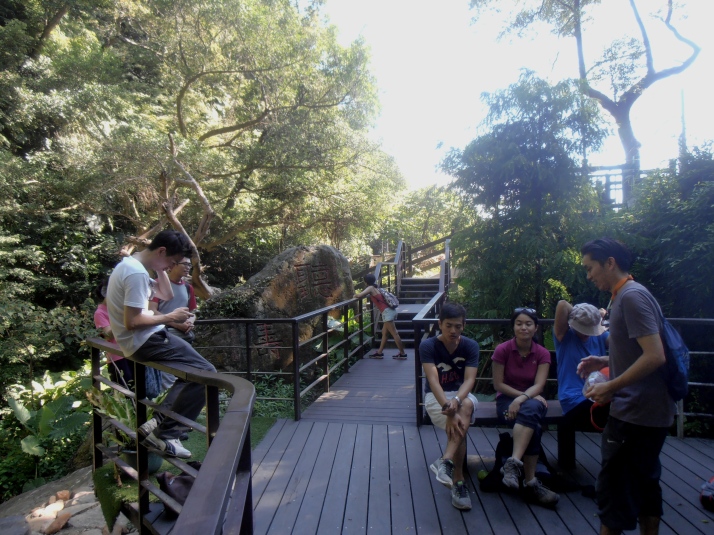 rest area at the old bridge

From the old bridge walk along the road uphill back past the temple to where the road makes a hairpin turn up ahead. There is a bridge here that crosses the stream.  This is the start of an unmarked trail that goes up the gorge along the river.

start of the trail along the sream

This trail is the highlight of the hike. The trails follows the river upstream and ends at Cuifeng Waterfall. Some piping along the trail and around the waterfall does take away some of the beauty, but it is still a fantastic spot and trail.

From the falls there is a narrow trail that climbs up out of the gorge. The trail climbs steeply straight up at first before leveling out a bit and zig-zagging the rest of the way up. This trail is frequently damaged by typhoons and so the course changes slightly as hikers carve out a new trail. Look for hiking flags and tracks where other people have walked.

climbing up from Cuifeng Waterfall 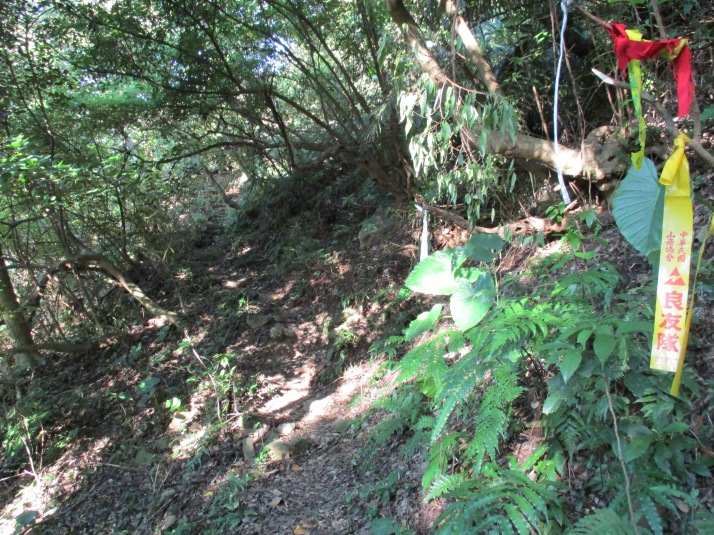 climbing up from Cuifeng Waterfall

At the top turn left onto a trail of stone steps climbing upwards, then turn right at another trail junction where the stairs end. This is the Tienmu Trail. The popular Tienmu Trail connects Tienmu and the Chinese Cultural University. There isn’t much left of the trail going left, it mostly just climbs up to the university. The Tienmu Trail follows a ledge on the side of the mountain and is a level dirt trail for most of its length before stone steps make the long, steep descent into Tienmu. Monkeys can sometimes been seen along trail. 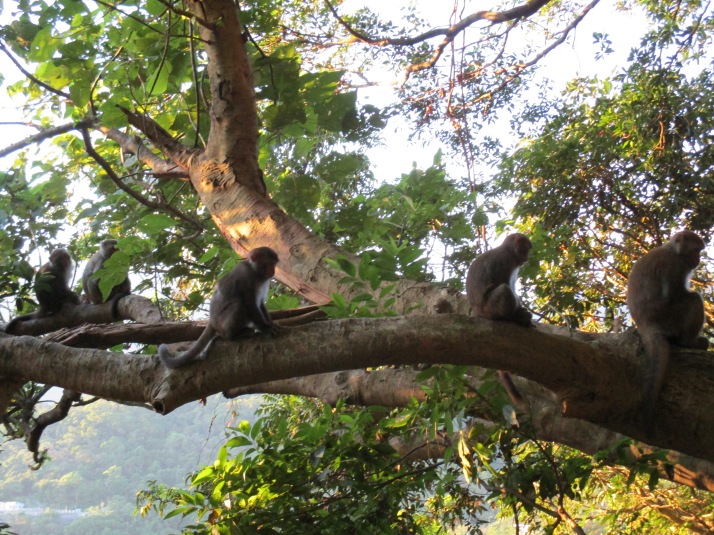 monkeys on the trail

Just before the stairs there is a road on your left. If you turn left and walk up this road there are several cafés here that have great views. The best one is Sleepless, the last one on the road after a couple of sharp turns. It is great place to relax over cold drinks and food after hiking. The views over Taipei are fantastic. It doesn’t open until late afternoon/early evening and fills up quickly as families and couples come here to have dinner on the large outdoor patio deck.

turn right here for Tienmu, or left for Sleepless

Or turn right here to continue going down to Tienmu. The stairs, known as the thousand steps, go mostly straight down rather steeply at times. There is a small pond with benches about halfway down.

steps going down to Tienmu

pond on the way down to Tienmu

Map of the Hike

There was an error retrieving images from Instagram. An attempt will be remade in a few minutes.

Brief travels and hikes through Taiwan

OFF THE BEATEN TRACK

Sights, interesting places, and other things about Taipei and Taiwan mixed with film photography.